When an ensemble identified with the standard classical repertory drops an unfamiliar contemporary work amid its usual fare, all too often it can amount to a quick, uncomfortable jolt in an otherwise smooth ride. But even the prickliest offering can be made approachable with a smartly chosen, supportive context.

Sharing space on the program were “Oiseaux Exotiques” by Messiaen, Mr. Murail’s principal teacher, and “La Mer” by Debussy, who served as a spiritual forebear. Mozart, represented by his Piano Concerto No. 11 (K. 413/ 387a), was for once the odd man out, though hardly an unwelcome presence.

Mr. Murail, who has taught composition at Columbia University since 1997, was among the architects of spectralism, a musical style difficult to explain succinctly. Taking their lead from Messiaen’s emphasis on timbre and resonance, the spectralists during the 1970s used computers to analyze and map the acoustic properties of sound — the overtones produced by a given note, for instance — and used the information to fashion rich, strange harmonic strata.

In “Gondwana,” a watershed spectral work named after the Indian legend of a sunken continent as well as after the gargantuan prehistoric land mass that included present-day Antarctica, South America and Africa, Mr. Murail acoustically simulates electronic processes to build and destabilize the harmonic textures.

Anyone led by the title to expect something analogous to Debussy’s painterly waves and swells might have been disappointed in the relative stasis of Mr. Murail’s music. For 17 minutes “Gondwana” shimmers, hisses, snaps and undulates with the sludgy, wayward flow of hot lava, occasionally erupting in livid bursts.

At one point the music assumes an unexpected lushness not unlike that found in Strauss. Moments later unorthodox playing techniques employed en masse render an uncanny facsimile of a punishing storm — not a poetic evocation, but almost literally the sound outside your window on a gray, blustery day.

Even those not swayed by Mr. Murail’s music surely must have been impressed with the musicians’ technical prowess. Though some audience members seemed to make a point of withholding their applause, Mr. Murail was greeted with a robust ovation.

In some ways the Mozart concerto was itself a challenging proposition. Mr. Morlot’s trim, elegant conception sometimes seemed at odds with the pianist Olli Mustonen’s elastic phrasing and quirky accentuation, especially early on. Soloist and ensemble were more simpatico during Messiaen’s giddy birdsong evocations. The concert closed with a “Mer” of impetuous sweep and vibrant color. 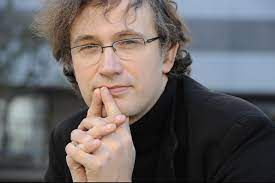